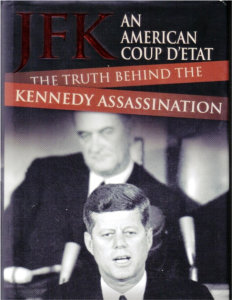 On the 46th anniversary of his death, further hard corroboration of LBJ’s mysterious rise to power through Texan money can be found in the revelations of Robert A Caro New Yorker article ‘The Secrets of LBJ’s Archives: On a Presidential Paper Trail‘ (22 January 2019). Caro is writing the acclaimed definitive biography of President Lyndon Baines Johnson (four volumes so far)

Any doubts that LBJ was acting as a conduit for Federal tax money being passed to big Texan Corporations from 1939 onwards are comprehensively demolished by Caro’s hard documentary evidence.

The article lends support to the facts I reveal in my book JFK: An American Coup d’Etat about LBJ’s role in one of the darkest episodes of US history (notes for original sources).

On LBJ and Texas

‘At the heart of the oil cartel was an informal, shadowy cabal calling itself the ‘8F Group’ after the suite where it held its meetings at the Lamar Hotel in Houston. The group had been in existence since the 1930s, and it brought together some of the richest and most powerful men in Texas. In their number by the early 1960s were also representatives from State and Federal Politics, lawyers, bankers, businessmen and the Mafia. In 1962-3, the Suite 8F Group included oil barons H L Hunt, Billy Byars, Sid Richardson and Clint Murchison; Congressional fixer, lawyer and LBJ crony, Homer Thornberry; local politicians, State Governor John Connally and State Attorney General Waggoner Carr; Lyndon Baines Johnson; his personal attorney, Ed Clark – Mr Fixit – as well as prominent bankers and businessmen, including selected Mafia Dons who were, after all, local ‘businessmen’. The Texas oil moguls had also gone to considerable lengths to cultivate J Edgar Hoover over the years; both Billie Byars of Humble Oil and Clint Murchison helped to pay for the FBI Director’s annual vacation at a Mafia-owned and run resort in Del Mar California. And all of them were friends with the Vice President, Lyndon Baines Johnson. Texas oil was big, powerful and had bought key individuals in Washington DC.

‘LBJ held a special position in the ‘8F Group’ because he was effectively their spokesman in Washington. Before America eventually joined the war in 1941, the Texans had creamed off Federal tax dollars for their companies by using their own placemen in Washington to direct the hosepipe of Roosevelt’s ‘New Deal’ government dollars to the Lone Star State. Sam Rayburn knew where his interests lay and by 1940 the powerful Texan Senator virtually controlled the Senate by his ability to pack key political committees with his friends. LBJ joined that group in the late 1930s and by 1960 he was openly the representative of Texas capitalism. One wit even jibed, ‘To understand LBJ, you have to go to the Brown & Root of the matter …” Brown & Root was the Texan Corporation that had made millions out of America’s involvement in the Second World War and had groomed and supported LBJ every step of his political career. LBJ was their paid-up representative in every way. As a Senator and Leader of the House, LBJ represented himself, the business interests of the Texas 8F Group (especially Brown & Root) and his constituents: and in that order.

‘By the autumn of 1962, the 8F Group were becoming collectively concerned about their President in Washington. Not only did they not own and control him, but he was beginning to do things that would reduce their income. For the power brokers, oil billionaires and bankers of Texas, the answer was simple.

‘Someone was going to have to do something about John F Kennedy. Up to then the rich Texans had tolerated him. But removing the Oil Depletion Allowance was a step too far. In 1962, $300 million dollars was a lot of money. Around the 8F Group table ‘groupthink’ was unanimous. John F Kennedy was dangerous. He would have to be stopped.