The invasion of Normandy by Allied forces on 6 June 1944, was the Western Allies’ most critical operation of World War II.

By 1942 German armies had overrun most of Europe, North Africa and the western Soviet Union. They set up murderous police states and imprisoned million of people in the pursuit of implementing a policy of breeding a Germanic master race. With gas chambers and firing squads, Nazi Germany killed millions of Jews, Poles, Russians, homosexuals, gypsies, disabled people and others undesirable to the Nazi regime. If the attack, nicknamed ‘Operation Overlord’, had failed – and Hitler’s Wehrmacht had succeeded in pushing the invaders back into the sea – then world history would have been altered. ‘It’s hard to imagine what the consequences would have been had the Allies lost,’ says Timothy Rives, of the Eisenhower Presidential Library. ‘You could make the argument that they saved the world.’

Failure on D-Day would have freed Hitler to redeploy 20 more divisions, including eight Panzers, to meet the Red Army’s summer 1944 onslaught on the Eastern Front. The German generals would never have risked their 20 July bomb plot against a now victorious Führer and Germany’s V-weapons programme would have had the critical extra time it needed to produce thousands more new rockets and jet fighters. Many people forget that, even with D-Day and the Allied bombing offensive, German industrial production peaked in September 1944.

Also, as Andrew Roberts points out, if the Russians had overwhelmed the German armies in the East, nothing could have prevented the whole of Western Europe – perhaps even as far as Paris – falling to Joseph Stalin’s USSR. 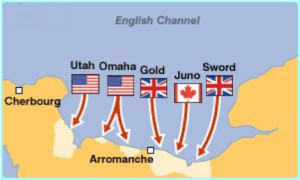 The 50 miles of Normandy coastline is therefore one of the most important battlefields of World War II. Today’s golden tourist beaches witnessed the start of one the most ambitious and historically important campaigns in human history. In its strategy and scope – and with its enormous stakes for the future of the free world – it was among the greatest military achievements ever. The Western Allies’ goal was simple and clear cut: to put an end to the Germany military machine and topple Adolf Hitler’s barbarous Nazi regime.

For the very old men of the surviving British, American and Canadian troops who spearheaded that assault at dawn on what one commentator called ‘the longest day’, this year’s anniversary was special. It will be their last big celebration of their victory, 75 years ago in the summer of 1944. Amid the beautiful French holiday countryside, one of the most critical struggles of the twentieth century took place. It was a struggle that would eventually end at the gates of Hitler’s Chancellery in Berlin on the last day of April 1945, as a demented and broken Hitler poisoned his dog and his mistress, before finally blowing his own brains out.

But D-Day nearly didn’t happen. The whole enterprise was delayed for 24 hours by bad weather and heavy seas. Having taken the momentous decision, on the night before the invasion Eisenhower drafted an ‘In case of failure’ note, to be published if necessary: ‘If any blame or fault attaches to the attempt, it is mine alone,’ he wrote. Like all professional soldiers, he knew that in the final analysis – assuming that his soldiers had weapons and would fight – only two factors are of paramount importance in war: intelligence and logistics.

On both counts the Allies triumphed. One of the biggest and most successful deception operations ever fed the German General Staff a brilliantly conceived and executed stream of false intelligence. From a phantom ‘4th Army’ in Scotland, preparing to invade Norway, to Patton’s massive ‘1st US Army Group’ in Kent, with its thousands of rubber tanks, fake landing craft and a mock oil depot across from the Pas de Calais at Dover, the Germans were completely fooled. In reality the busiest warriors were a few hundred Allied radio operators busy transmitting phoney signals to simulate non-existent armies’ radio traffic.

What is also often forgotten also is the staggering scale of the logistic back-up effort put in to ensure that the amphibious assault went well.

The statistics of all the materiel the Allies piled up on the beaches of southern England to support the invasion are mind blowing – not just in scale, but in attention to detail. All over southern England massive new ammo and supply dumps mushroomed. Millions of tons of stores, 100,000 vehicles and 250,000 men piled into the Channel coast bases in the spring of 1944. One of those supply units alone piled up 3 500 tons of soap, which Eisenhower insisted went to France so that his soldiers could take baths. 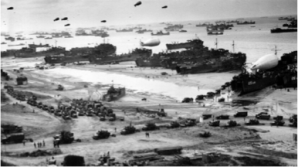 ‘Ike’ had 3 million troops under his command; what they all devoured in just one day was stupendous. According to historian Rick Atkinson, US commanders had ‘calculated daily combat consumption, from fuel to bullets to chewing gum, at 41,298 pounds per soldier. Sixty million K-rations, enough to feed the invaders for a month, were packed in 500-ton bales.’

With his experiences of the Somme and Gallipoli, Churchill was deeply pessimistic about casualties. There is ample evidence that he harboured grave misgivings about the whole enterprise. The US Chiefs of Staff were having none of it. They insisted that casualty evacuation was given particular attention. Many of the ships headed across the channel for France, had no soldiers on board. Instead, they carried some 30,000 stretchers, 96,000 blankets and tons of supplies – blood, dressings, splints, plasma, beds, to name a few – for the assault troops that would land at Normandy.

Once ashore, a sophisticated and well-organised system of field hospitals swung into action. Medics on the beach applied basic first aid as they sorted the casualties. The ‘transportable wounded’ were embarked on to the very ships that had carried the blankets that now covered them. Across the channel they were loaded on to trains for the 150 American-built hospitals across southern England. This was the medical staffs’ vital contribution: to save lives, none more so than the forward Casualty Clearing Stations and mobile Field Hospitals as the battle plunged further into France. ‘Doctors and nurses, often working 14-hour-long shifts, consider this time as their actual battle participation,’ one medical official wrote.

Except for the difficulties on Omaha Beach – when the Americans launched their swimming tanks too far out, where they were swamped by the waves – casualties were surprisingly light, considering the perils of any frontal assault. Although German machine-gunners hit Allied soldiers hard as they came ashore from their landing craft, the Montgomery’s attack plan (in his role as Land Forces Commander) overwhelmed them, as 160,000 assault troops, 12,000 aircraft and 200,000 sailors manning 7000 vessels first blasted the defenders, then stormed the beaches.

The eight assault divisions suffered 12,000 killed, wounded and missing. The Americans lost 8230, with 2400 casualties at Omaha alone. On the other beaches casualties were surprisingly light; at Utah, the US lost only 197 men. Thanks to the firepower of their swimming tanks and other ‘funnies’ the British and Canadians had only 3000 casualties. Although no major French units took part in the invasion, many French civilians were killed, mostly by Allied bombs or shell fire. Some injured citizens were reduced to disinfecting their wounds with calvados, the local apple brandy.

By dawn on 7 June the Allies were safely ashore, dug in and there to stay. German counter attacks had been repulsed. Supplies and fresh reinforcements were flooding in and the bridgehead was expanding. As the Allied soldiers marched inland from the beaches, the delighted French cheered, many of them giving flowers to the soldiers. The success of D-Day changed the course of history for ever.

That is why President Johnson’s tart reply to de Gaulle in 1966, when the arrogant French leader demanded that all US troops leave France immediately, still hits home: ‘What? Including all the ones in your cemeteries?’