Well, it’s already started. The many wars in Syria, Lebanon, Iraq, Iran are beginning to come together into one single, bigger conflict. We are on the road to another war.

The shadow war, which has been going on between Iran and its sworn enemies, Israel and America, ever since Iran’s 1979 Islamic Revolution now looks like escalating. In the last few weeks there have been ominous military, naval, diplomatic and psychological-warfare developments on all fronts. The omens are not good; we seem to be heading for a major bust-up not very far from here. 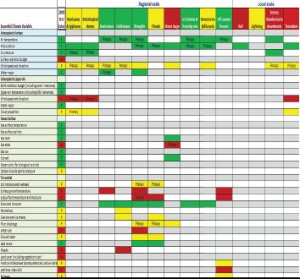 Intelligence officers use a system called an ‘Indicators and Warnings board’ to monitor events and assess where they are heading. Essentially it is a list of key questions, listing the critical information requirements. Examples might be:

• Are the potential enemy’s warplanes bombed-up and armed?
• Are the pilots on weekend leave?
• Is radio traffic normal?
• Have reservists been called up?

The answers are traffic-light coded – green for normal, amber for abnormal activity and red spelling danger.

Today, the I&W board for the Middle East is not looking encouraging. From Tehran to Tobruk the war drums are beating. Iran, as ever, is at the heart of the problem. 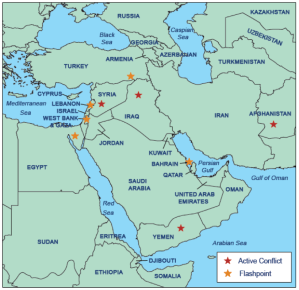 Should another red star be added to the Strait of Hormuz in the Persian Gulf?

The narrow Strait of Hormuz is the world’s most important oil chokepoint because of the large volumes of oil that pass through the strait. In 2018, its daily oil flow comprises 21 per cent of global petroleum liquids consumption. China’s gluttonous need for fuel makes the Gulf indispensable to Beijing.

This puts Iran in a strong position geographically; and for decades Tehran has been threatening to block the Straits. In July 2018, Tehran hinted that Iran could disrupt oil flows through the Strait in response to US sanctions and Trump’s calls to reduce Iran’s oil exports to zero. A Revolutionary Guards commander warned that Iran would block all oil through the Strait if Iranian exports were stopped.

The USA has been willing to use its firepower in the past. It escorted ships here during the 1980s ‘Tanker War’. America fought its last naval battle in these waters against Iran in 1988. In July that year, the warship USS Vincennes even shot down an Iranian airliner, killing all 290 aboard, in what Washington said was an accident. Tehran said it was a deliberate attack.

This summer has seen Iranian attacks on tankers with the result that now the US Navy is putting together a coalition of nations to counter a renewed maritime threat from Iran.

This US move to build a maritime multinational force to patrol the key sea route across the Strait of Hormuz prompted outrage in Tehran. Iran’s Foreign Minister blamed the US, insisting that ‘any extra-regional presence is by definition a source of insecurity’ and that Iran ‘won’t hesitate to safeguard its own security.’ The result is that tankers are now being convoyed down the Straits. All it needs now to spark fighting is some out of control Revolutionary Guard commander chancing his luck – and the Iranian RGC is a law unto itself.

This is demonstrated daily in Syria, where the long arm of Tehran now reaches as far as the Israeli border. For months now an undeclared low intensity war has been waged by the Israelis, systematically targeting Iranian weapon dumps, training camps and missile sites across Syria. Unfortunately Netanyahu’s professed strategic goal – ‘the removal of all Iranian forces from Syria’ – is fantasy. The result is a dangerous instability, because Israel is confronting a nasty dilemma. An enemy sworn ‘to drive Israel into the sea’ is camped on his borders; and every day that Tel Aviv does nothing to pre-empt Iran’s expansion makes the potential enemy stronger.

Netanyahu has been steadily raising the stakes, ostensibly with the aim of forcing Iran back to its own turf. But what does Israel seek to achieve? Removing Iran’s forces from the entire Middle East? Changing the Iranian regime?

What kind of American backing can Israel expect? Israel is now upping the ante. It was undoubtedly responsible for recent explosions at Iran-linked sites in Iraq. Sabotage or air strikes were involved and Israel stands at the top of the list of potential culprits. Israel is on the verge of expanding its anti-Iran campaign from Syria deep into Iraq to check the threat from the Islamic republic. But any Israeli action in Iraq comes with high risk that it could ignite a major regional war.

So the danger of crossing the line between limited and full-scale warfare between Israel and Iran grows daily more likely, especially now that Hezbollah – Tehran’s Shi’a proxy, currently running Lebanon – appears to be gearing up for a missile strike on Israel’s cities.

To make this devil’s brew more dangerous still, Iran – smarting from increased US sanctions – is now openly accelerating its drive to get a nuclear weapon. The Mad Mullahs, hell bent on war, can just about be contained; but the Ayatollahs with a bomb? For Israelis that is a chilling step too far. It threatens the country’s existence. Israel has made it very clear: it will not allow an Iranian bomb – by force if necessary.

Others in the region are equally nervous of any Atomic Ayatollahs. Sunni Saudi Arabia has the money and technology to build a bomb quickly to deter the Shi’a of Iran; and only last week President Erdogan openly hinted that of Turkey has an interest in obtaining a bomb, adding to worries about the proliferation of nuclear weapons in the Middle East.

If this were not bad enough, everywhere you look in the Middle East there are many other dangerous flashpoints, many of them already the scene of fierce fighting. In Yemen, Sunni fights Shi’a (Saudi versus Iran), as the Houthis become part of Iran’s regional proxy warriors. On the Syrian border, Turkey is already busy fighting the Kurds. Gaza and the West Bank still simmer with anti-Israeli anger. Israel has already mobilised some reservists as a cornered Netanyahu looks for a grand gesture – probably a demonstration of Israel’s military might – to help him form a government after the recent elections.

Even sleepy little Cyprus, sitting secure in the eye of the hurricane, is now feeling the heat. Drawn by the lure of black liquid gold, powerful allies are now jockeying for position. Ankara suddenly finds itself having to confront a Greek-Cypriot defensive alliance of Israelis, Egyptians, Greeks and Italians – plus France and the USA – all hungry to get their hands on the spoils of the huge natural gas reserves off the coast. Gunboats now protect the Turkish prospecting ships as a symbol, a warning and a deterrent.

The truth is we are sitting in the middle of a region set to explode at any moment, thanks to an aggressive Iran-sponsored build-up. The plan appears to be to force Israel to concentrate on dealing with threats to its civilian population – from rocket barrages and commando raids – from Lebanon, Syria, and Gaza. Consequently, Israel would not be able to focus on blocking the principal surge when it comes.

Now even China is involved. Beijing considers Iran to be its strategic partner in the greater Middle East and vital to China’s ‘Belt and Road Initiative’ across Asia. The PRC knows that the Iranian network of roads, railroads and pipelines all the way to the Mediterranean is a major contribution to the ‘New Silk Road.’ But now, Beijing is becoming increasingly concerned by the sudden possible slide to war caused by Iran’s regional ambitions.

It may not come next week, it may not come next year, but be in no doubt, the Middle East is gearing up for a major war. And it’s important to remember that for Jews, Christians and Muslims alike, according to their scriptures, a final battle between good and evil will usher in God’s brave new world, free from sin.

The place for this battle? The ancient city of Megiddo, better known by its Greek name – Armageddon – a real, geological location in Israel….